How Will The New G99 Standard Affect You? 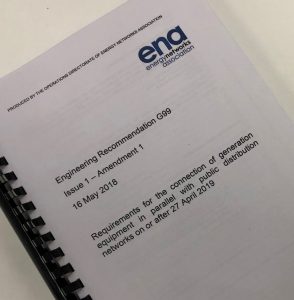 G99 will have a major impact on all High Voltage Generation, have you considered how this will affect you?

Over the past 20 years the UK has experienced a massive shift from Central to Distributed Generation.

Initially led by a nationwide dash for Utility Scale Renewable powerplants – Onshore Wind and Solar – the subsequent growth sustained by the STOR, FFR, EFR and latterly Capacity Market Auctions for smaller faster reacting Power Stations has meant that the move to Distributed Generation is now irreversible.

The impact on the National and Regional Grid systems has been immense. To ensure that National Grid complies with its regulatory obligations, all newly built Distributed Generation plants from the 27th March 2019 now have to offer additional services – under fault conditions – to the Local, Regional and National Grids. Some generator providers are not compliant with the new G99 specification

utilligence has complied an initial technical review and will be issuing technical updates over the coming months. The Technical Notes have been drafted by Utilligence ltd after reviewing all the relevant documentation, discussions with the ENA and attending seminars with national Grid and DNO’s around the country.

G99 heralds this new era, it is not perfect, it is not fully understood by all parties, but it is here, and compliance is mandatory.

Please sign up here to receive the technical bulletins and updates as they are produced at https://utilligence.co/newsletter-subscription/